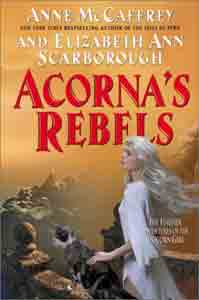 Beloved by millions of readers, Anne McCaffrey is one of science fiction's favorite Authors. Writing with Nebula Award-winning Author Elizabeth Ann Scarborough, she has created the bestselling Acorna Series featuring the adventures of the brave unicorn girl.

Acorna's people, the Linyaari, have started to reclaim their homeworld from the ravages of the brutal alien Khleevi. But the expedition has unlocked a larger mystery about the origins of the Linyaari people -- one that has led Aari, Acorna's beloved lifemate, into a dangerous journey through time and space. A journey from which Aari may never return.

Now acorna, joined by Captain Becker, Mac, Nadhari, and RK, sets off on a determined mission to save her beloved. But a forced crash landing brings the crew to the exotic jungle world of Makahomia, home of the mysterious Temple Cats. Beautiful and barbaric, Makahomia has been blockaded for years to protect itself -- and the Federation.

Racing to save the Temple Cats from a deadly disease, Acorna uncovers a sinister plot to destroy the sacred felines and exploit Makahomia's people, an evil scheme that reaches out into the very depths of space.

While Nadhari confronts the demons of her childhood, Acorna must lead a small band of determined rebels to stop the conspiracy and unravel a dangerous mystery, a quest that takes them into the secret temples and hidden sanctuaries of that world. But within one sacred shrine Acorna discovers shocking information that may lead to Aari ... or to disaster.

...this tale provides little new except perhaps some insight into the world of RK and is mostly for long time fans of the Series or either Author. -- Harrier Klausner, Harriet Klausner's Review Archive

The linear plot line, plentitude of cats, and salvation-style unicorn will appeal to this audience although they may appear simplistic to more adult readers. -- BooksForABuck

In many ways, Acorna's Rebels is hard to review. While the core of it is such a straight-forward story, the offshoots of the tale, the intrigues that twist about it and are what make it adventurous, are things you don't want to mention because their discovery is what makes the read fun. -- Cindy Lynn Speer, SF Site