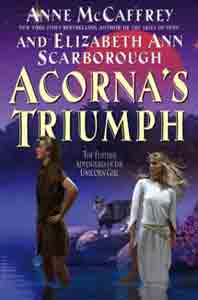 Beloved by millions of readers, Anne McCaffrey is one of science fiction's favorite Authors. Writing with award-winning Author Elizabeth Ann Scarborough, she has created the bestselling Acorna Series, focusing on the adventures of the brave unicorn girl.

Now, with Acorna's Triumph, they turn to the dramatic conclusion of the Series, as Acorna faces her most difficult challenge ever. She has defeated slavers, a deadly international conspiracy, and the vicious alien Khleevi, only to endure the loss of her beloved Aari, distant in both time and space.

Now, finally, Aari has returned, and together they can finish rebuilding their home world. But Aari is oddly changed, to the point where he barely remembers Acorna -- much less their love -- and his actions grow more and more sinister ... As Acorna tries to stop a vicious criminal from destroying innocents, a new complication arises. Sensing the Linyaari weakness, the deadly Khleevi return, determined to take back the planet...for good. In this dark time, it will take all of the unicorn girl's courage and determination to rescue Aari and stop the alien menace once and for all.

The plot reads like a Series of television episodes -- each crisis is neatly wrapped up and then the characters move on to the next adventure. -- BooksForABuck

The ladies did a wonderful job finishing up this popular Series, and I really look forward to their future projects. -- Cindy Lynn Speer, SF Site

Fans of Star Trek, Star Wars and Lost in Space will find ACORNA's TRIUMPH a wondrous delight and a fitting end to this breathtaking Series. -- Harriet Klausner, BooksNBytes

I would recommend this as great read for anyone that is interested in time travel and fantasy. -- Karey Herriman, SFRevu