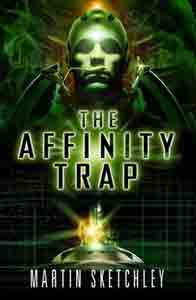 Synopsis of The Affinity Trap

Vourniass Lycern -- a conosq of the three-sex Seriattic race -- holds the key to peace between Earth and Seriatt, and thus the continuation of the lucrative illegal arms trade conducted by General William Myson. When Lycern decamps to the Affinity Group complex on Veshc, Myson orders experienced Military Intelligence Officer Alexander Delgado to fetch her. While once respected, the changes that followed Myson's rise to power saw Delgado's position reduced in all but name, his independent character and methodologies unwelcome. But Delgado, sees the mission not as a chance to reinstate his name to the position of respect it once held, but an opportunity to engender a much greater level of change. When he comes into contact with Lycern, however, Delgado faces his greatest ever challenge, the consequences of which have the ability to change his life -- and potentially the future of Earth -- forever. In the first of the Structure novels, Martin Sketchley has created a vivid widescreen setting in which the boundaries between good and evil, male and female, human and non-human are often indistinguishable despite the wishes and perceptions of the startling characters he has created. Sexual

Reviews of The Affinity Trap

This is an enjoyable, intriguing universe Mr. Sketchley has begun to show us. -- Steve Mazey, The Eternal Night

We have a stonkingly wonderful, sheer bloody genius ending that most Authors wouldn't even dream of let alone write. -- Cheryl Morgan, Emerald City

300 odd pages of that tosh and there isn't even a conclusion; it's going to be a trilogy or Series or something. I don't know. I don't care. I certainly won't be reading them either way. -- Rachel Broome, SFCrowsnest

This fascinating idea is propelled by a merely serviceable plot. -- Mark Wilson, Scifi.com