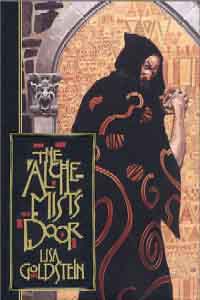 Synopsis of The Alchemist's Door

Scientist, mathematician, and court astrologer to Queen Elizabeth I, John Dee is also one of the sixteenth century's most renowned alchemists, driven by a passion to fathom the elemental secrets of the cosmos. But when his reckless assistant, Edward Kelley, succeeds in using a crystal sphere to summon angels, Dee is catapulted into an awesome struggle that may extinguish the light of reason forever." "One of the spirits invoked is a cunning demon who takes possession of Dee's young daughter, Katherine, and shows Dee a frightening vision of his own future. Terrified by what has been foretold, Dee abruptly decides to close his house in London and race to Eastern Europe with his long-suffering wife, Jane, and their two young children." "Their desperate flight brings them at last to the fabled city of Prague; a center of culture, knowledge, and learning, both sacred and profane, a gateway between the Eastern and Western worlds, and also, it is whispered, a door between our world and the world of the spirits." There, in the city's ancient streets, Dee encounters the mystic Rabbi Judah Loew, who enlists his aid in the creation of a golem - a man fashioned from clay - to defend the city's Jewish Quarter from persecution. And he asks Dee's help to avert an impending crisis that threatens to engulf the world. For ancient legends say that the fate of the world rests on the shoulders of thirty-six righteous men. And if one of those righteous men dies before his time, the world will end and dark spirits will remake it in their own image.

Reviews of The Alchemist's Door

While full of historical anecdote and alchemical reference tailored to titillate interest, the storyline to The Alchemist's Door tends to wander, threatening to become a travelogue of hermetic interests... -- William Thompson, SF Site

The main difficulty of this novel is allowing yourself to venture into Doctor John Dee's mindset, but once you do I think you...ll find Goldstein's novel quite rewarding. -- Eva Wojcik-Obert, Fantastica

Too often, the narrative relies on summary where dramatization would be more effective. -- Cynthia Ward, Scifi.com

Aficionados of historical fantasy or simply of strong prose will love this fast-moving and entertaining novel. -- Victoria McManus, SFRevu

What an intriguing read this is! -- Sally Estes, Booklist

THE ALCHEMIST'S DOOR is a pleasant read with its setting in the historically significant period of Elizabeth I, its use of historic characters in alternate history settings, and its travels through the mystical world of Eastern Europe at a time when the Turks were still capable of threatening all of Christendom and when Jews were forced into ghettos. -- BooksForABuck.com