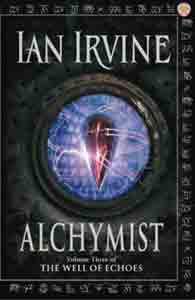 Alchymist (The Well Of Echoes Book 3)

Synopsis of Alchymist (The Well Of Echoes Book 3)

The Node has failed, rendering humanity's battle clankers and the Aachim's constructs useless. With the battle lost, hordes of alien Lyrinx are swarming from the tar pits of Snizort, intending to fall upon the survivors and destroy them to the last man. Tiaan, crippled and unable to walk, is held prisoner by the vengeful Vithis, who is determined to extract her geomantic secrets at any cost. For his failings, Nish has been cast out and branded a traitor, while Irisis, accused of high treason, is forced to flee for her life. The fate of humanity is dependent on the survival of one wily old man, the Scrutator Xervish Flydd. But Flydd has been blamed for the defeat at Snizort and is condemned to die a brutish death as a slave - hauling ironclad clankers out of the battlefield mire until his heart bursts under the strain.

Reviews of Alchymist (The Well Of Echoes Book 3)

The finale is a gripping and nasty nail-biter that will leave you dry-mouthed and begging for the final instalment. -- Sue Davies, SFCrowsnest