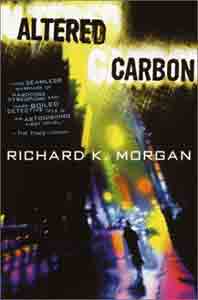 In the twenty-fifth century, humankind has spread throughout the galaxy, monitored by the watchful eye of the U.N. While divisions in race, religion, and class still exist, advances in technology have redefined life itself. Now, assuming one can afford the expensive procedure, a person's consciousness can be stored in a cortical stack at the base of the brain and easily downloaded into a new body (or "sleeve") making death nothing more than a minor blip on a screen.

Ex-U.N. envoy Takeshi Kovacs has been killed before, but his last death was particularly painful. Dispatched one hundred eighty light-years from home, re-sleeved into a body in Bay City (formerly San Francisco, now with a rusted, dilapidated Golden Gate Bridge), Kovacs is thrown into the dark heart of a shady, far-reaching conspiracy that is vicious even by the standards of a society that treats "existence" as something that can be bought and sold. For Kovacs, the shell that blew a hole in his chest was only the beginning. . . .

This is a lovely noir thriller in the style of Chandler and Hammett detective stories, face-paced and compellingly written with a convincing backdrop. -- Tony Chester, Concatenation Web Edition

The writing is skillful, with elegant prose that lifts even the most gruesome scenes above the ordinary. -- Victoria Strauss, SF Site

As an SF adventure story, there's plenty in here to keep you turning the pages. -- GF Willmetts, SFCrowsnest

I predict Altered Carbon will be hoovering up rewards this year like a coke addict on holiday in Columbia. -- Stuart Carter, Infinity Plus

Though a superb blending of a who-done-in inside a vividly descriptive far future galaxy, the key to ALTERED CARBON is the ethics issues cleverly interwoven within the story line. -- Harriet Klausner, BooksNBytes

The novel can be recommended to all readers with thick skins and a love of action. -- Chirs Wyatt, Cinescape

Altered Carbon is an impressive debut for Richard K. Morgan, who promises to become one of the better Authors to enter the field in recent years. -- D. Douglas Fratz, Scifi.com

Looks like we have another interstellar hero on our hands -- Mike Snider, USA Today

It's not unpleasant... but it's not really a Book. It's more like a screenplay. It has none of the rich pleasures that comes from reading rather than going to the movies. -- Inchoatus,com