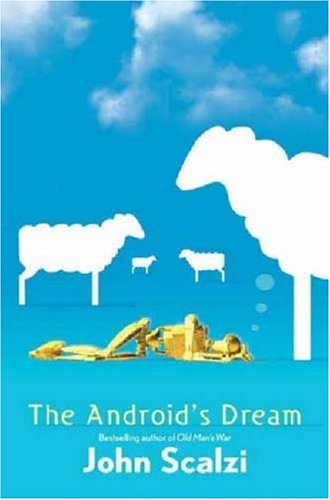 Synopsis of The Android's Dream

human diplomat kills his alien counterpart. Earth is on the verge of war with a vastly superior alien race. A lone man races against time and a host of enemies to find the one object that can save our planet and our people from alien enslavement...

That's right, a sheep. And if you think that's the most surprising thing about this Book, wait until you read Chapter One. Welcome to The Android's Dream.

For Harry Creek, it's quickly becoming a nightmare. All he wants is to do his uncomplicated mid-level diplomatic job with Earth's State Department. But his past training and skills get him tapped to save the planet--and to protect pet store owner Robin Baker, whose own past holds the key to the whereabouts of that lost sheep. Doing both will take him from lava-strewn battlefields to alien halls of power. All in a day's work. Maybe it's time for a raise.

Throw in two-timing freelance mercenaries, political lobbyists with megalomaniac tendencies, aliens on a religious quest, and an artificial intelligence with unusual backstory, and you've got more than just your usual science fiction adventure story. You've got The Android's Dream.

Reviews of The Android's Dream

Despite the improbable circumstances of the story, it's a great read, and nothing to be sheepish about liking. -- Ernest Lilley, SFRevu

The Android's Dream is just the right gene-splicing of fast action and furious comedy SF has been needing for ages. -- Thomas M. Wagner, SFReviews.net

This is a great satire by an Author to watch unless you are the Commander in Chief, a VP to busy to have served, or a Defense Department general officer and their civilian equivalent/superior. -- Harriet Klausner's Review Archive

You won't hear any complaints from me if Scalzi decides to write a sequel. -- John DeNardo, SFSignal

...Scalzi has the knack of writing a sleek, intelligent naturalism with just the right number of infodumps... -- Paul Di Filippo, Scifi.com