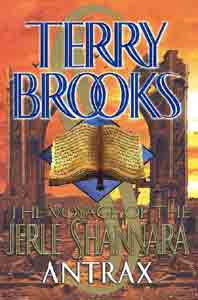 A new novel by Terry Brooks is always a cause for celebration. For more than twenty years, the New York Times bestselling Author of the classic Shannara epic has proven himself one of the modern masters of fantasy, winning the hearts and minds of devoted readers around the world. In his last acclaimed novel, Ilse Witch, a brave company of explorers led by the last Druid, Walker Boh, traveled across unknown seas in search of an elusive magic. Yet perhaps Boh and his team were lured there for sinister, unforeseen purposes...

Now in Antrax, as the crew aboard the airship Jerle Shannara is attacked by evil forces, the Druid's prot...g... Bek Rowe and his companions are pursued by the mysterious Ilse Witch. Meanwhile, Boh is alone, caught in a dark maze beneath the ruined city of Castledown, stalked by a hungry, unseen enemy.

For there is something alive in Castledown. Something not human. Something old beyond reckoning that covets the magic of Druids, elves, even the Ilse Witch. Something that hunts men for its own designs: Antrax. It is a spirit that commands ancient technologies and mechanical monsters, feeds off enchantment, and traps the souls of men.

With the Jerle Shannara under siege and Antrax threatening the bold and unwary, the Ilse Witch finds herself face-to-face with a boy who claims to be the brother she last saw as an infant. Now a young man, Bek wields the magic of the wishsong and carries the Sword of Shannara upon his back. Unsure whether to trust Bek or to slay him, the Ilse Witch takes him prisoner. One has come pursuing truth, the other revenge. Yet both seek Walker Boh with the fate of the Four Lands hanging in the balance.

Return to the world of beloved novelist Terry Brooks, where creatures drift up from the earth like mist, a hypnotic song can kill, a sword can cut through a veil of lies and one man, the true heir of an ancient magic, must choose between betrayal and redemption. -- terrybrooks.net

With the long preparation for adventure out of the way, ANTRAX throws the reader directly into adventure, letting up the violence only to turn up the intensity of the emotional attachments between his characters. -- BooksForABuck.com

It is a spellbinding epic even with a major flaw. The plot stops in the middle of the action, forcing the reader to buy or obtain from the library the last installment to read what happened next. -- Harriet Klausner, BookBrowser

This episode moves the epic along at breathtaking speed, ruthlessly (and realistically) disposing of some characters, while developing others (especially Rue Meridien and Ahren Elessedil) in intriguing directions. -- Hilary Williamson, BookLoons

Whereas ISLE WITCH seemed to be a rebirth for the somewhat tired Shannara Series, ANTRAX is a step backwards. -- James T. Voelpel, Cinescape