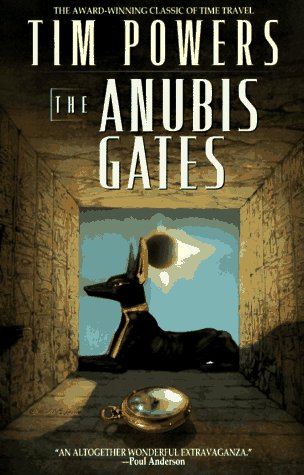 Synopsis of The Anubis Gates

The colonization of Egypt by western European powers is the launch point for power plays and machinations. Steeping together in this time-warp stew are such characters as an unassuming Coleridge scholar, ancient gods, wizards, the Knights Templar, werewolves, and other quasi-mortals, all wrapped in the organizing fabric of Egyptian mythology. In the best of fantasy traditions, the reluctant heroes fight for survival against an evil that lurks beneath the surface of their everyday lives.

Reviews of The Anubis Gates

It's tough to give a mediocre rating to a celebrated Author and a popular Book... but honestly it can't stack up with some of the greats -- Inchoatus

The Anubis Gates is a must read for Steam Punkers of all ages. -- Strange Words

If you enjoy even one reading of the paperback, get the hardcover; you'll want to loan out the paperback again and again until it disappears or falls apart. -- Kate Sherrod, AllScifi.com

Difficult to put down once started, The Anubis Gates is a classic work of Fantasy, which should be on everyone's Bookshelf. -- Rod Cameron, Rod Cameron Reviews

The problem is just that, with some more attention, it could so easily have attained the status of a modern science-fiction classic. -- Steven Wu, Steven Wu's Book Reviews