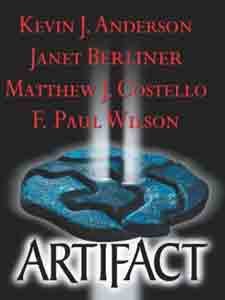 Deep in a tomblike cavern along the ocean floor lies a secret that has remained hidden from humanity. Until now. . .An Oilstar drilling rig off the coast of Venezuela in the Dragon's Mouth channel has pierced an underwater cavern and brings to the surface four stones unlike anything on this earth. Frik Van Alman, the tough-as-nails maverick head of Oilstar realizes immediately that they represent an extraordinary opportunity . . .and a terrible danger. His superstitious native crew, already uneasy working in the infamous waterway, refuse to dive in search of a fifth stone, and when Frik's lab chief tests them, the results confirm Frik's hunch: when these four stones are connected they hint at a power source that could revolutionize the world's energy production. And, Frik realizes, such a revolution would put him and all other oil companies out of business.

Before he can plot his next move, his lab chief Paul Trujold, fearing the greed and calculation in Frik's eyes, sends the stones to safer hands. One of the stones lands in the hands of Paul's daughter, Selene Trujold, the leader of an ecological action trying to halt Frik's drilling and the damage it's causing to the Caribbean ecology.

Frik and Trujold meet in the lab after Paul has sent away the stones, and an accident badly burns them both, killing Paul before Frik can find out what he's done with the find. Desperate to reclaim the stones and determined to find the fifth piece of the puzzle, Frik enlists the aid of the Daredevils Club, a select few risk-taking thrill seekers of whom Frik is one, who meet every New Year's Eve to compare bold new stories of the past year's exploits. Their members are a disparate bunch, including a doctor, Arthur Marryshow, whose greatest risk is healing those who risk their lives in political hotspots; Ray Arno, a stuntman turned demolitions expert; Simon Brousseau, an expert deep-sea diver; and Joshua Keene and Terris McKendry, a bickering best-buddies tandem experienced in undercover operations requiring strength, expertise with weapons, and nerves of steel.

At the next New Year's Eve meeting, Frik proposes a mission: collect all five stones and return them to him. Along with the rest of the daredevils is Peta Whyte, Marryshow's proteg..., not officially a member, but more than qualified by her role in planning and effecting Arthur's escape from prison on her native Grenada sixteen years before, when she was but sixteen. She attends in Arthur's place, for he's been killed, victim of a terrorist bombing just blocks from their Times Square rendezvous.

The Daredevils embark on an adventure that takes them along the coast of Venezuela, from stealth jungle raids to deep-sea dives, from the haunts of Latin American power brokers to the camp of eco-terrorists. A fast-paced, thrill-a-minute hunt challenges the loyalties of the daredevils, as they become pawns in a deadly game of deceit and betrayal. After all the adrenaline rushes and spilt blood, the remaining members of the Daredevils Club gather once again on the following New Year's Eve, this time in Las Vegas, for one final confrontation, as Frik slips the five stones into place. . . as the unthinkable is created.

Artifact has moments of suspense, but readers will be tempted to skim the many pages of descriptive prose to get to them. -- Mark Graham, The Rocky Mountain News