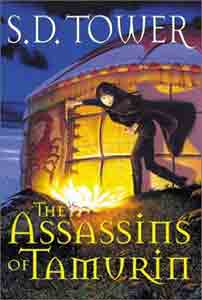 Synopsis of The Assassins of Tamurin

The river god had spared the infant girl the villagers found drifting on a boat with a dead man and dying woman, so the superstitious townsfolk believed it would be a sacrilege to let the child die as well. The name Lale, meaning "lucky," is the last good thing they give her, and she grows up abused, unloved, and resented -- until, at age eleven, she comes to the attention of Makina Seval, "Mother Midnight," the absolute ruler of the Despotate of Tamurin. Enrolled in Three Springs, the Despotana's special school for orphaned and unwanted girls, young Lale finally finds what she has always coveted: respect, affection, community . . . a home.

But Three Springs is an institution of dark and shadowy purpose, a place where the wards of Mother Midnight are trained to become perfect spies and cold-blooded, ruthlessly efficient killers. And Lale has learned her lessons well. At age twenty, she stands poised to play her role in the Despotana's grandest scheme: vengeance.

Years earlier Makina Seval's entire family -- including her infant son, the rightful heir to the Bethiyan throne -- was brutally slain through the plots of a devious chancellor, who then raised up a young usurper to be the Sun Lord. Now it is Lale's duty to insinuate her way into the court -- and the bed -- of that same usurper, Terem Rathai, no longer a child but a powerful and dangerous foe. And after she has earned Terem's trust, Lale is to kill him.Bound by the blackest sorcery to remain loyal to her beloved Mother, Lale will suffer nightmarish torment -- even death -- if she fails. But once enmeshed in the web of deceit and treachery that has been spun around her, the young assassin begins to doubt the righteousness of her sworn mission. For not only will the Despotana's grand design bring doom upon the world itself, there hangs over Lale yet another appalling catastrophe -- one that threatens all that she is, all she has ever believed.

Lale has fallen in love with the man she must destroy. . . .

Reviews of The Assassins of Tamurin

In Assassins of Tamurin S.D. Tower has created an exotic world that borrows a little from the Far East, but owes most of its captivating power to the vivid imagination of this husband-wife writing team. -- EJ McClure, SFRevu

Though the ending seems too rapidly short, this novel towers over much of what the genre offers. -- Harriet Klausner, Allscifi.com

ASSASSINS can't be recommended to readers at large, but obsessive fantasy fans and/or people with lots of patience will become somewhat interested before the Book is over. -- Chris Wyatt, Cinescape