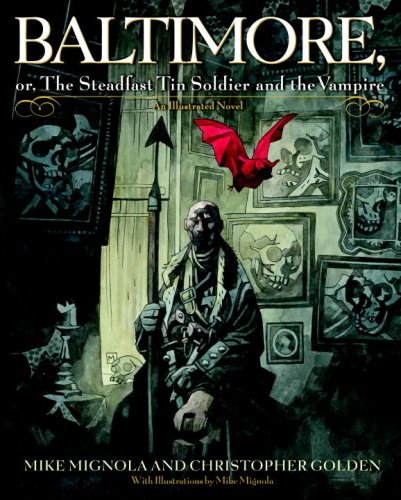 Baltimore,: Or, The Steadfast Tin Soldier and the Vampire

Synopsis of Baltimore,: Or, The Steadfast Tin Soldier and the Vampire

From celebrated comic artist Mike Mignola and award-winning novelist Christopher Golden comes a work of gothic storytelling like no other. Reminiscent of the illustrated tales of old, here is a lyrical, atmospheric novel of the paranormal...and a chilling allegory for the nature of war.

...Why do dead men rise up to torment the living?... Captain Henry Baltimore asks the malevolent winged creature. The vampire shakes its head. ...It was you called us. All of you, with your war. The roar of your cannons shook us from our quiet graves.... You killers. You berserkers.... You will never be rid of us now....

When Lord Henry Baltimore awakens the wrath of a vampire on the hellish battlefields of World War I, the world is forever changed. For a virulent plague has been unleashed...a plague that even death cannot end.

Now the lone soldier in an eternal struggle against darkness, Baltimore summons three old friends to a lonely inn...men whose travels and fantastical experiences incline them to fully believe in the evil that is devouring the soul of mankind.

As the men await their old friend, they share their tales of terror and misadventure, and contemplate what part they will play in Baltimore's timeless battle. Before the night is through, they will learn what is required to banish the plague...and the creature who named Baltimore his nemesis...once and for all.

Reviews of Baltimore,: Or, The Steadfast Tin Soldier and the Vampire

It's a Book that doesn't leave the mind as quickly as you reach the end -- Gayle Surrette, SFRevu

...there's really nothing not to enjoy about Baltimore unless tales of monsters, heroes and a pre-technology, post-apocalyptic world do nothing for you. -- Johnny Butane, Dread Central