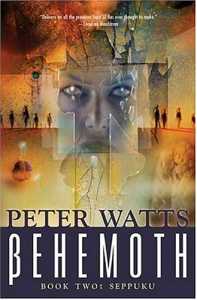 Lenie Clarke-amphibious cyborg, Meltdown Madonna, agent of the Apocalypse-has grown sick to death of her own cowardice.

For five years (since the events recounted in Maelstrom, she and her bionic brethren (modified to work in the rift valleys of the ocean floor) have hidden in the mountains of the deep Atlantic. The facility they commandeered was more than a secret station on the ocean floor. Atlantis was an exit strategy for the corporate elite, a place where the world's Movers and Shakers had hidden from the doomsday microbe ...ehemoth-and from the hordes of the moved and the shaken left behind. For five years "rifters" and "corpses" have lived in a state of uneasy truce, united by fear of the outside world.

But now that world closes in. An unknown enemy hunts them through the crushing darkness of the Mid-Atlantic Ridge. ...ehemoth- twisted, mutated, more virulent than ever-has found them already. The fragile armistice between the rifters and their one-time masters has exploded into all-out war, and not even the legendary Lenie Clarke can take back the body count.

Billions have died since she loosed ...ehemoth upon the world. Billions more are bound to. The whole biosphere came apart at the seams while Lenie Clarke hid at the bottom of the sea and did nothing. But now there is no place left to hide. The consequences of past acts reach inexorably to the very floor of the world, and Lenie Clarke must return to confront the mess she made.

Redemption doesn't come easy with the blood of a world on your hands. But even after five years in pitch-black purgatory, Lenie Clarke is still Lenie Clarke. There will be consequences for anyone who gets in her way-and worse ones, perhaps, if she succeeds...

Although he still blows things up with panache, Seppuku feels hurried, and while it's by no means shallow, it lacks the depth and sense of outrageous surprise that characterized its predecessors. -- Paul Witcover, Scifi.com

BEHEMOTH: SEPPUKU is the last of the Lenni Clark Books and it is just as action-packed and exciting as STARFISH: MAELSTROM and BEHEMOTH: B-MAX. -- Harriet Klausner, ParaNormal Romance Reviews