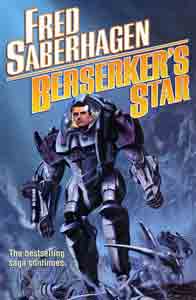 Acclaimed Author Fred Saberhagen continues his widely popular and influential Berserker(r) Series, a chronicle of a war between humanity and the terrifying race of sentient machines bent on death and destruction.

Pilot Harry Silver's name is known throughout the galaxy-and that notoriety does not always work in his favor. While he has defeated his share of Berserkers, he has also stolen a powerful weapon from the Space Force, making him a fugitive from the life he once knew. Looking for an adventure, and not one to turn down a lot of cash, Harry agrees to bring a passenger aboard his ship, Lily, a woman who is on a quest to retrieve her husband.

It won't be easy, as Lily's husband has joined a secretive religious cult on Maracanda, an almost-planet lodged between a shifting black hole and a neutron star. While the landscape of Maracanda is treacherous, so, too, may be the people around Harry Silver.

As the search for Lily's husband deepens, Harry finds himself investigating a larger mystery and looking for missing person, almost ending up one himself. And as always, there is the threat of death from above, in the path of a machine whose only intent is to kill. . . .

After the slow start I kind of slogged through for a while and then something interesting happened. I found that I really wanted to know what was really going on, and what was going to happen to these annoying people. I still don't know how that happened. -- Dave Goldfeder, SFRevu