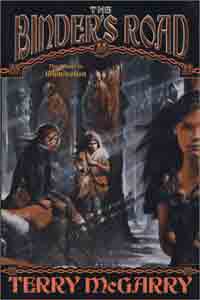 Synopsis of The Binder's Road

The sequel to Illumination

A troubled land.A priceless gift.And the dawn of a new light.

Six years after a conflict that extinguished all magelight, Eiden Myr is in chaos. Wilding weather destroys crops. Drought bakes some regions while others are flooded; mountains quake; poisoned rivers rise; disease and pestilence spread.

In a dying trader town, three little girls fight to pro-tect a secret that could cost them their lives, while a young lad-of-all-crafts finds that local murders are only the first clue in a chilling conspiracy. In the far north, the remnants of the realm's warders struggle to compensate for magelight's loss. In the far south, a military race is remembering its origins and rousing from its stupor. Along the shoreline, a band of guerrilla fighters, posted to repel invasion, prepares to battle for mastery of the disaster-ridden realm-while one woman, a disgraced soldier, summons the courage to defy them all.

And on a remote, windswept island, a new breed of scholar strives to plumb the mysteries of ancient texts before they crumble in the absence of the wardings that preserved them-and before the realm crumbles for want of the knowledge they contain.

Which of them is the binder destined to reshape the shattered world?

Reviews of The Binder's Road

The Binder's Road may struggle at times to keep its head above water, but its fine moments are very fine indeed, breaths of an air sweet with the promise of good things to come. -- A.M. Dellamonica, Scifi.com