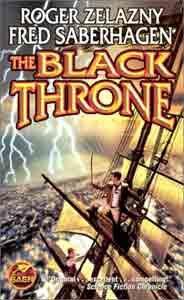 Synopsis of The Black Throne

SHE SANG BEYOND THE GENIUS OF THE SEA,

As children they met and built sand castles on a beach out of space and time: Edgar Perry, Little Annie, and Edgar Allan Poe.... Fifteen years later, Perry meets Annie again, all grown up and beautiful - and in the real world. She warns him of his mortal peril, then flees for Europe on a mysterious black ship.

Perry is recruited by a fabulously wealthy man to follow that ship to Europe where he meets the famed detective Auguste Dupin, has an encounter with a Maelstrom and a black raven, has a run in with a Pit and a Pendulum, and lives many more of the stories his alter ego, Edgar Allan Poe, wrote. He and Poe have exchanged places: Perry will thrive in the dark, romantic world where lead can be transmuted to gold, ravens can speak, orangutans can commit murder, and beautiful women are easy to come by; while Poe is now doomed to live out his life a misfit, and end as a pauper, a drunk, and a genius....

Reviews of The Black Throne

Zelazny and Saberhagen obviously wrote "The Black Throne" for the fun of it, and that fun makes what might otherwise have been a silly, pretentious piece of fluff an enjoyable read. -- Cathy Olanich, SciFi Hut