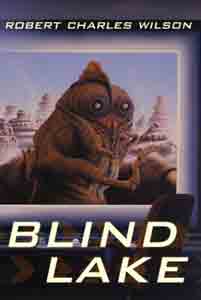 At Blind Lake, a large federal research installation in northern Minnesota, scientists are using a technology they barely understand to watch everyday life in a city of lobster like aliens upon a distant planet. They can't contact the aliens in any way or understand their language. All they can do is watch.

Then, without warning, a military cordon is imposed on the Blind Lake site. All communication with the outside world is cut off. Food and other vital supplies are delivered by remote control. No one knows why.

The scientists, nevertheless, go on with their research. Among them are Nerissa Iverson and the man she recently divorced, Raymond Scutter. They continue to work together despite the difficult conditions and the bitterness between them. Ray believes their efforts are doomed; that culture is arbitrary, and the aliens will forever be an enigma.

Nerissa believes there is a commonality of sentient thought, and that our failure to understand is our own ignorance, not a fact of nature. The behavior of the alien she has been tracking seems to be developing an elusive narrative logic--and she comes to feel that the alien is somehow, impossibly, aware of the project's observers.

But her time is running out. Ray is turning hostile, stalking her. The military cordon is tightening. Understanding had better come soon....

If the focus goes a bit too wide and blurry at the end, Wilson never loses sight of the ''human angle.'' His theme is the importance of communication, which, as his characters come to learn, should never remain one-way -- Gerald Jonas, The New York Times

Blind Lake is a compelling, character-driven tale that touches on every human emotion. -- Paul Giguere, SFRevu