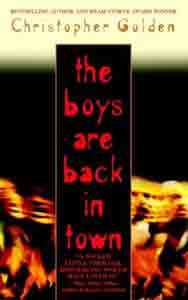 The Boys Are Back in Town

Synopsis of The Boys Are Back in Town

From a master of horror, dark fantasy, and suspense comes a compelling and uniquely original work of paranormal suspense in which one man finds himself trapped in a web of ever-shifting reality which threatens to remake the whole of the world?unless he can find a way to stop it.For Will James, facing his tenth high school reunion is far from his finest hour?especially since his life has not gone exactly as he planned. Dumped at the altar by his high school sweetheart and with his dreams of being a prize-winning reporter dashed by his job at a Boston tabloid, he is not sure he is ready to face his former peers.But what he does find at the reunion is far more than he bargained for. He soon learns that one of his buddies had died several years back?even though Will had received an e-mail from him only a few days before. It is not long before other people Will was convinced were alive are turning out to be dead as well?or married to other people, or childless where they used to have children. And new memories are swarming in to replace what Will is convinced was his old life, until he no longer knows what is real and what is not. The only thing he does know for certain is that he has to figure out why he alone remembers snatches of another life before everything dissolves into this new, darker reality.

Reviews of The Boys Are Back in Town

The novel comes across as a sometimes-uncomfortable mix of YA horror and adult dark fantasy. -- Mervius, Fantastica Daily