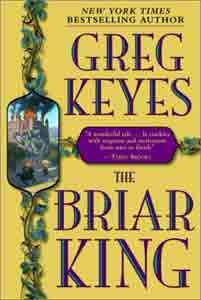 Synopsis of The Briar King

It has been two thousand years since the Born Queen defeated the last of the Skasloi lords. In doing so she freed the race of humans-once taken from their distant homes and forced to wear the bitter yoke of slavery. Thus begins the saga of the Kingdoms of Thorn and Bone, an epic tale of war and virtue, sorcery and betrayal. . . .

Book One of The Kingdoms of Thorn and Bone

In the kingdom of Crotheny, two young girls play in the tangled gardens of the sacred city of the dead. Fleeing an imaginary attacker, the girls-one of whom is the reckless young daughter of the king-discover the unknown crypt of the legendary, ancestral queen, Virgenya Dare.

In the wilds of the forest, while investigating the slaughter of an innocent family, king's holter Aspar White weaves his way through a maze of ancient willows...and comes face-to-face with a monstrous beast found only in folk tales and nightmares. Meanwhile, traveling the same road, a scholarly young priest begins an education in the nature of evil, found festering just beneath the surface of the seemingly peaceful land.

The royal family itself comes under siege, facing betrayal that only sorcery could accomplish. Now-for three beautiful sisters, for a young man made suddenly into a knight, and for a woman in love with a roguish adventurer-a rising darkness appears, shattering what was once certain, familiar, and good. These destinies and more will be linked when malevolent forces walk the land. For Crotheny, the most powerful nation in the world, is shaken at its core. And the Briar King, harbinger of death, has awakened from his slumber.

Imbuing his tale with richness, pathos, action, and passion, Greg Keyes begins an amazing new epic that takes fantasy fiction to a new level. At the heart of the story, Keyes has placed a remarkable young woman, Anne Dare, the youngest daughter of a royal family . . . and the one person upon whom the fate of this world may depend.

Reviews of The Briar King

Suffice to say that if you are a fan of thoughtful, complex fantasy in the tradition of George R.R. Martin, Jacqueline Carey, or Barbara Hambly, you want this Book and the three to follow. -- Maryelizabeth Hart, Mysterious Galaxy

This opening novel in his Kingdoms of Thorn and Bone saga is a novel other novels will be measured against in the years to come. -- Rob H. Bedford, SFFWorld

Normally, I don't like to skip between so many points of view, but Keyes layers this marvelous plot together so deftly that the transitions are seamless. -- EJ McClure, SFRevu

Skillfully conceived, stirringly executed, this is a Book that will remind jaded readers of just why the traditional high fantasy epic remains so enduringly popular. -- Victoria Strauss, SF Site

The Briar King is so smart, in terms of storytelling and character development, that I...d be steering you away from the point if I stopped and complained about any of it. -- Mervius, Fantastica Daily

The really interesting thing about The Briar King, given that Greg Keyes never skimps on the narrative clich..., is how well-written, compulsive and dark the novel becomes, and how often flashes of real originality escape from the cookie-cutter confines of the plot. -- Jon Courtenay Grimwood, The Guardian