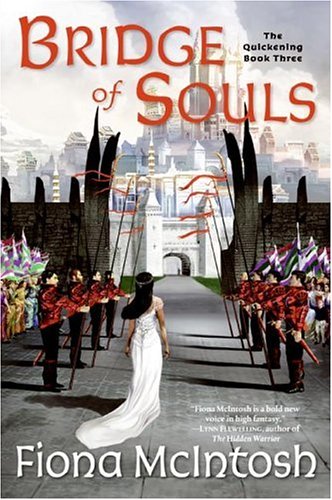 Synopsis of Bridge of Souls

Wyl Thirsk, former general of the Morgravian army and bearer of the curse known as Myrren's gift, is running out of time. Marriage between his beloved Queen Valentyna and his sworn enemy, the despotic King Celimus, is imminent; yet, despite the impending nuptials, war looms between the two nations, while the threat from the Mountain Kingdom grows stronger. Trapped in a body not his own, with his friends and supporters scattered throughout the realm, Wyl is as desperate to prevent the wedding as he is to end Myrren's "gift" -- a magic that will cease only when he assumes the throne of Morgravia.

Clinging to an ominous suggestion from his young friend Fynch, an increasingly powerful mage, Wyl must walk his most dangerous path yet -- straight into the brutal clutches of Celimus in a desperate attempt to save his nation, his love, and himself.

Reviews of Bridge of Souls

The Series was well done and very readable -- I think the hardest part of this trilogy was waiting to read the complete story. -- Gayle Surrette, SFRevu

A fast-paced and enchanting page-turner. -- Kirkus, Reprinted on Monsters And Critics

Neither this nor the second Book quite lives up to the promise of the first, Myrren's Gift, but the tension builds nicely and anyone who has followed Wyl this far will definitely need to find out what happens. -- Jon Courtenay Grimwood, The Guardian

Fiona McIntosh, thank you for the great ending which had me biting my nails until the last word was read. -- Josephine Crowley, Infinitas Bookshop