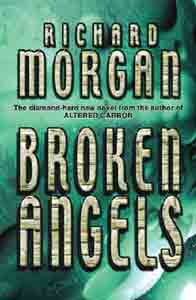 Fifty years after the events of ALTERED CARBON Takeshi Kovacs is serving as a mercenary in the Procterate sponsored war to put down Joshuah Kemp's revolution on the planet Sanction IV. He is offered the chance to join a covert team chasing a prize whose value is limitless and whose dangers are endless. Here is a novel that takes mankind to the brink. A breakneck paced crime thriller ALTERED CARBON took its readers deep into the universe Morgan had so compellingly realised without ever letting them escape the onward rush of the plot. BROKEN ANGELS melds SF, the war novel and the spy thriller to take the reader below the surface of this future and lay bare the treacheries, betrayals and follies that leave man so ill prepared for the legacy he has been given; the stars. This is SF at its dizzying best: superb, yet subtle, world building; strong yet sensitive characterisation; awesome yet believable technology , thilling yet profound writing. Richard Morgan is set to join the genre's world wide elite.

It is difficult to tell you how much I looked forward to this Book and how much I enjoyed it without sounding too much like a slavering fanboy.up when compared with Green's other work, but is till an easy and enjoyable read that should appeal to fans new and old alike. -- Joe Gordon, The Alien Online

Broken Angels is another superb Book by Morgan, it grips like a vise and squeezes so much cynicism, rage and action into just 394 pages. -- Stuart Carter, Infinity Plus

For all the philosophy of Broken Angels though, it does lack the edginess and energy of Altered Carbon and I didn't think it half as good. -- John Berlyne, SF Revu

This is a novel that can be easily underestimated precisely because it is such a great work of genre; its world view goes much beyond just telling a rousing good tale. -- David Soyka, SF Site

Broken Angels is an excellent sophomore effort; not as fresh or compelling as Altered Carbon (which sets a very high standard), but still a ripping good read. -- John C. Snider, Scifi Dimensions

One might at times imagine that if Leigh Brackett were a young SF writer today creating new planetary-romance environments for her hero Eric John Stark to navigate, she'd be turning out prose much like this. -- Paul Di Filippo, Scifi.com