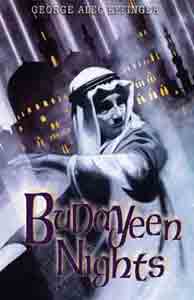 George Alex Effinger's first short-fiction collection in nearly 15 years, these nine tales are set in Budayeen, the walled city in the sand, a city of dark shadows and even darker inhabitants, where a Raymond Chandleresque vision has been created-hardboiled, noir, futuristic-but with a twist. The sights, smells, and denizens of Budayeen are brought to life-from the city's sordid, decadent underbelly to the glamorous excesses of the sex industry. This collection includes four tales of Mar...d Audran, the protagonist in Effinger's three highly acclaimed Budayeen novels. Also included is Effinger's best-known story, "Schr...dinger's Kitten," in which a young girl's dreams portend myriad possible quantum futures, all focused on her encounter with a would-be rapist.

...if you missed it the first time around, these stories are a wonderful introduction to one of the most memorable settings in SF and the characters, from Marid Audran to Chiriga the bartender to Bill the cab-driver, who bring it to life. -- Greg L. Johnson, SF Site