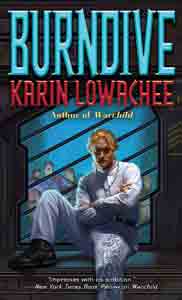 The son of an infamous starship captain, grandson of a diplomat admiral, and his home station's ...Hot ...1 Bachelor,... Ryan Azarcon lives in a fishbowl. After witnessing a horrific terrorist bombing of his grandfather's embassy, Ryan's grief-stricken face is plastered all over the net. Now, a year later, he is still plagued by nightmares of bloody destruction that make him desperate to escape his family, the relentless media, and his memories. When his distant and domineering father takes controversial action in the long, depleting interstellar conflict, Ryan is targeted by assassins. Forced to confront the violence, he begins to question everything he thought he knew about the war and his father. He will realize the enemy is not who he thinks and uncover a secret that may destroy any hope of peace...

Burndive is if anything even better than its predecessor on multiple levels, not least plot, writing and both character psyche and development. -- Vegar Holmen, The Alien Online

Burndive is a completely different novel than the first, and shows Lowachee's skill better than a carbon copy sequel. -- Steve Nagy, MardDust

Less of an action novel than its predecessor, Burndive is a space opera of character growth and change. -- J.B. Peck, Scifi.com

Burndive is well-written, emotionally fraught, set in a scary, complex world where no one is quite what they seem. -- Sherwood Smith, SF Site

Burndive is an engaging read, though slower in pace than Warchild, setting the scene for a third episode, which I look forward to very much. -- Hilary Williamson, Bookloons