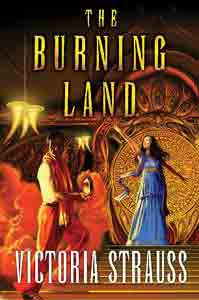 Synopsis of The Burning Land

After long years of oppression, the rightful rulers of Arsace have finally reclaimed the holy city of Baushpar and the First Temple of the God. At last, the desecrated temples can be rebuilt and the people's suffering redressed. But tensions between the secular and sacred worlds abound, and rumors arise of renegade Shapers -- powerful mages who hold no allegiance to either the King or the Brethren, and whose magic knows no restraint.

Unbeknownst to the elders of her people, the gifted Axane has dared to dream, to see the outside world beyond the hidden enclave of Refuge -- a world the people of Refuge no longer believe exists -- that has no tolerance for change and will soon break down the walls of their secret sanctuary. But Axane's dreaming is forbidden, and to warn Refuge is to doom herself.

Chosen to lead an expedition to reclaim the renegade mages, Gyalo, a young Shaper, must journey across the mystic Burning Land in a deadly adventure of danger and temptation, a journey that will force him to face his innermost demons and possibilities both sacred and profane. For Refuge hides a shocking truth about the very nature of the world itself -- a secret that will start a war without end.

Reviews of The Burning Land

THE BURNING LAND is the best fantasy I've read in a long time. I highly recommend this one. -- BooksForABuck

If I...d put this Book back on the shelf unread, I...d have missed out on a satisfying, thought-provoking read. -- Juliet E McKenna, The Alien Online

The novel builds inexorably to a tragic confrontation that is both heartbreaking and seemingly inevitable, and the conclusion, while completely satisfying'this is not one of those novels that ends on a cliffhanger...is likely to leave most readers hoping to visit this world again. -- Pamela Sargent, Scifi.com

In a genre full of ...collect the plot coupon objects... and ...farmboy becomes king/sorcerer... novels, it may be enough that The Burning Land tries to do something different with serious religious issues, even if, at least for this reader, the novel faltered in the execution of this goal. -- Samuel Lubell, SFRevu