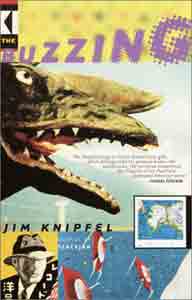 Synopsis of The Buzzing

Meet Roscoe Baragon-crack reporter at a major (well, maybe not that major) metropolitan newspaper. Baragon covers what is affectionately called the Kook Beat-where the loonies call and tell him in meticulously deranged detail what it's like to live in their bizarre and lonely world. Lately Baragon's been writing stories about voodoo curses and alien abductions; about fungus-riddled satellites falling to earth and thefts of plumbing fixtures from SRO hotels by strange aquatic-looking creatures. Not exactly New York Times material.

Maybe it's the radioactive corpse that puts him over the edge. Or maybe it's the guy who claims to have been kidnapped by the state of Alaska! But Baragon is now convinced that a vast conspiracy is under way that could take the whole city down-something so deeply strange that it could be straight out of one of the old Japanese monster movies that he watches every night before he goes to sleep. But stuff like this only happens in the movies. Right?

The Buzzing marks the fictional debut of the acclaimed Author of Slackjaw. It is a novel of deep paranoia and startling originality. And it could certainly never happen. Right? Right?

Reviews of The Buzzing

It is a fast-paced, funny read, and while some readers may find its conclusion hasty and lacking resolution, it still makes you wonder: Maybe those "kooks" on the street screaming about the apocalypse aren't so crazy after all. -- Jay Pawlowski, Rocky Mountain News

...there are moments when you actually think Baragon might be onto something. -- Brendan Bernhard, LA Weekly

A worthwhile read, even if it's a stopgap for those of us with a taste for offbeat characters and strange situations, who are waiting for the next Carl Hiaasen novel. -- David Soyka, Strange Horizons

Overall, this isn't an out-and-out bad Book, and some of the descriptions of New York life are evocative; it's just that it's, well, all somewhat dull where it should sparkle. -- John Grant, Infinity Plus

Although the plotting has a tendency to unravel just slightly and pacing could have been better it is clear that Knipfel is vying for the a seat at the fiction table previously held by writers such as Kurt Vonnegut and Joseph Heller. -- Paul Giguere, SFRevu