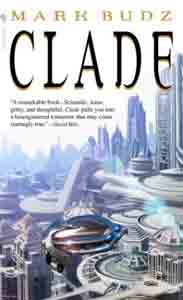 IT's A POST-ECOCAUST WORLD. WELCOME TO IT.

In the San Jose of tomorrow, all of nature is gengineered...from the warm-blooded plants to the designer people. But even in a rigidly controlled biosystem, with its pheromone-induced social order, the American dream is still the American dream. Caught between these new-old worlds, Rigo is on his way up...he's going to be part of tomorrow, even if it means he has to leave today behind.

Written off as a sellout on the streets of his old ...hood, Rigo's got his own ap in an aplex, a 9-to-5er, and a girl. He's got opportunity. If he works hard, his job with a heavyweight politicorp could give him a chance to move up in the clades. But when he's chosen as part of a team to construct a new colony on a nearby comet, Rigo smells a setup. And when disaster strikes, he learns that if there's a way to bend the rules, there's also a way to break them...

A future of corporate genetics is envisioned in "Clade,' an excellent first novel by Mark Budz. -- Fred Cleaver, The Denver Post

It's not perfect, but Clade is a striking debut, and promises even better things to come from Mark Budz. -- Graham Sleight, Scifi.com

Despite some drawbacks, which I tend to dismiss as those of a first-time novelist, the Book is a quick and ultimately satisfying experience. -- Mervius, The Fantastica Daily

This Book had hopes and pretensions of attaining levels of mediocrity but the ending is just hopeless and heartlessly rips away any notion of caring we ever had for the main characters. -- Inchoatus