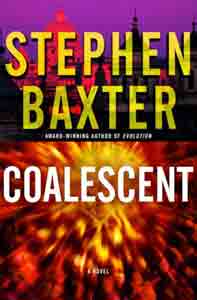 Coalescent is the first of a trilogy of novels that does nothing less than tell the story of mankind's role in the Universe from the perspective of our impossibly distant descendents - a race who have established a utopia at the end of time and the universe but who must now try and tackle of the shadow that the suffering of the past throws over their perfection. Three radically different novels (earth subsumed by the evolutionary step of the hive culture in man; a far future earth empire battling for survival against impossibly superior alien life; and a look at the moral conflict existing within a utopia millions of years in the future) will be linked by Baxter's uniquely far reaching SF ideas and a future that allows for the manipulation of the past. Or at least of a past.

Coalescent isn't bad at all ... I couldn't help tearing through the whole thing in just a couple of days ... but it feels somehow in need of a polish, of tightening up, and then it would be a very much faster-moving beast altogether, which for a conspiracy novel (and this is a conspiracy novel, albeit a very unconventional one) is something of a must. -- Stuart Carter, The Alien Online

Coalescent is still recognisably hard SF, but the characters are more closely observed than usual... -- Jon Courtenay Grimwood, The Guardian

Coalescent is a long first chapter in what promises to be a fascinating and thought-provoking story about the destiny of mankind. -- D. Douglas Fratz, Scifi.com

It is a triumph that the Author managed to squeeze so much space-time into this novel. -- Lucy Ward, SF Crowsnest