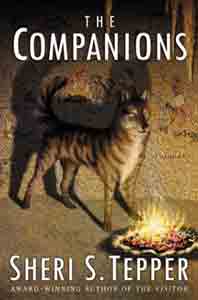 Synopsis of The Companions

Three planets have been recently discovered in deep space, and prosaically named to reflect their respective environments. Jungle, lush and foreboding, swallowed up an eleven-member exploratory team more than a decade earlier, while hot, harsh, and dusty Stone turned out to be phenomenally rich in rare ore, the most profitable new world to be found in a century. But it is the third, Moss, that could well prove to be the most enigmatic . . . and dangerous.

Enlisted by the Planetary Protection Institute -- an organization founded to assess new worlds for potential development and profit -- famed linguist Paul Delis has come to Moss to determine whether the strange multicolored shapes of dancing light observed on the planet's surface are evidence of intelligent life. With Delis is his half sister, Jewel, the wife of one of the explorers lost on Jungle. Working together, they are to determine the true nature of the ...Mossen... and decipher the strange "language" that accompanies the phenomenon.

Yet the great mysteries of this bucolic world -- three-quarters covered in wind-sculpted, ever-shifting moss -- don't end with the inexplicable illuminations; there is the puzzle of the rusting remains of a lost fleet of Earth ships, moldering on a distant plateau. Perhaps the biggest question mark is Jewel Delis herself and her mission here at the far reaches of the galaxy. Leaving an overpopulated homeworld that is rapidly becoming depleted of the raw materials needed for human survival, Jewel is a member of a radical underground group opposing a recent government edict that will eliminate all of the planet's ...nonessential... living inhabitants. And it is here, at the universe's unexplored edge, where the fate of endangered creatures may ultimately be decided -- though it will mean defying ruthless and unforgiving ruling powers to repair humankind's disintegrating relationship with the beasts of the Earth.

Reviews of The Companions

While I personally could have done with fewer but more developed stories, I still found the novel satisfying and turn-the-page compelling. -- Edward Carmien, SFRevu

The Companions has strong characters, well-developed aliens and alien worlds, strongly stated themes, action, suspense, all leavened with humor; everything Tepper fans have come to expect and appreciate in her work. -- Hank Luttrell, SF Site

Tepper is too much of a natural storyteller to disappoint her readers, most of whom will find The Companions a smart, engaging and involving space opera with some serious points to make. But with tighter writing and a more focused Authorial intelligence, this novel could have been much more. -- Pamela Sargent , Scifi.com