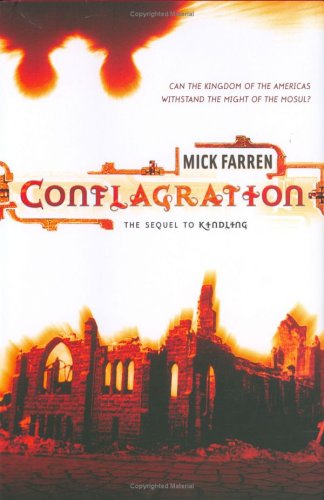 The world is at war. The Republic of the Carolinas and the Virginia Freestate have already fallen to the invading Mosul, a ravening, barbaric horde led by an evil fundamentalist priesthood. Only the Kingdom of Albany, with aid from the Norse Alliance of Britain and Scandinavia, remains free to continue the struggle.Against the hellspawn controlled by the Mosul stands The Four, a supernatural entity comprised of four youngsters from disparate backgrounds: Argo, the back-country hick; Jesamine, the slave-concubine; Raphael the Hispanian cannon-fodder conscript; and Cordelia, the spoiled aristocrat. Together, they alone have managed to combat the Mosul's Dark Things.The army of Albany moves south to attempt to free Virginia and The Four go along in support. The battle engages cavalry, infantry, and artillery ... but the Mosul have other weapons in their arsenal, and as The Four try desperately to protect their comrades from other-worldly foes, they catch fleeting glimpses of two albino children, the White Twins. Even the enigmatic Yancey Slide has no clue as to what kind of threat the twins may represent.

Call it Multiverse-punk if you must name it. -- Paul Di Filippo, Scifi.com