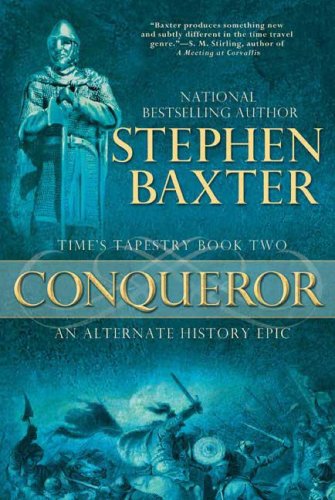 Three centuries have passed since Rome fell, as The Prophecy foretold. Now The Prophecy's scroll is in the hands of a young girl, the last surviving member of the family who received The Prophecy. She lives in tranquility, disguisd as a boy among the monks on the isle of Lindisfarne-until the Vikings come, deliberately destroying the final copies of the scroll. But it remains in her memory, and when William of Normandy, who history will call the Conqueror, rises to power, once more the fate of the land rests on actions inspired by those age-old words.

But as time passes, memory of The Prophecy dims--and the veiled girl struggles to understand her heritage before all knowledge of the future will be lost to the past.

...these Books serve as a refreshing overview of history and give the interesting flavor of how some events and small groups of people can change the course of the world. -- Paul Haggerty, SFRevu

...despite a clear desire to engage with the big ideas behind the history of England, I cannot help but feel that this Series is still some way short of attaining the intellectual and conceptual heights of Baxter's SF works. -- Jonathan McCalmont, Strange Horizons

With its rich historical backdrop, memorable characters and fast-paced action, this is a novel that's certain to please. -- Carlos Aranaga, ScifiDimensions