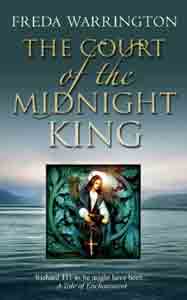 The Court of the Midnight King

Synopsis of The Court of the Midnight King

The most reviled monarch in English history or a man caught between the forces of light and darkness, pushed by circumstance into the vilest of crimes? The Wars of the Roses - colourful, full of fury and passion. In our histories - and Shakespeare's play - Richard the Third dies on Bosworth Field, hacked to death in a just ending. But another Richard exists, who is still loved in the North of England and remembered as their best ruler. But how can these two opposites have co-existed in the same world? Or did they? Through the eyes of Lady Katherine we see Richard grow up in a strange world where both Mother Goddess and patriarchal Christian God exist, and the struggle between the two religions is mirrored in that between York and Lancaster. From their teenage years, Freda Warrington traces Richard and Katherine's story during one of the most fascinating times in England's history.

Reviews of The Court of the Midnight King

I think this is very possibly one of the best Books I have ever read. -- Lesley Mazey, The Alien Online

Idealised but well realised, The Court of the Midnight King is seductive, sensuous and rich. -- John Toon, Infinity Plus