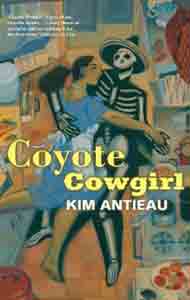 Jeanne Les Flambeaux-you know, the famous Flambeaux clan, the great chefs and restaurateurs of the Southwest-is the black sheep of her very accomplished family. She has a few problems. Like, for one, she can't cook. And she hears voices for another. And she screws up everything she touches for a third. No one, including herself, ever expected her to amount to anything, so she hasn't; she thinks of herself as an idiot savant-if you drop the savant part.

When her parents take a much-needed vacation, leaving her in charge of the family's ancient, prized possessions-a crystal skull and a priceless ruby scepter-she wakes up the next morning to find that her lover, Johnny (what is she doing with that loser?), has stolen the scepter. This propels her on a wild and wacky journey across the Great American Southwest, trying to catch up to Johnny and the scepter.

To complicate matters, single women start mysteriously disappearing throughout the southwestern. The police and the FBI have few clues-and Jeanne, as she stalks Johnny, is herself being stalked by someone or something. Fortunately-or unfortunately, Jeanne can't quite figure it out-she's aided in her impossible task by the crystal skull . . . now a talking crystal skull, which, of course, speaks only to her. The crystal skull, who calls himself Crane, leads Jeanne (who is rapidly becoming an actual heroine) through the casinos of Las Vegas, the mysteries of Kitt Peak, desert cults in Arizona, and finally to a wild climax that outdoes Tom Robbins . . . and maybe even gives Carlos Castaneda a run for his pesos.

Light and sexy, filled with imaginative characters and situations, and some of the hottest secret recipes from the Flambeaux recipe drawer, Coyote Cowgirl will leave you laughing and begging for a sequel.

Coyote Cowgirl may ultimately be a bit light and predictable, but its quirky cast of characters is charmingly drawn and there's an infectious sense of fun that permeates the whole Book. -- Claude Lalumi...re, Infinity Plus

Coyote Cowgirl is a terrific read and one that crosses a number of genre boudaries, not the lease of which being rich fantasy and fine food. -- Ernest Lilley, SFRevu