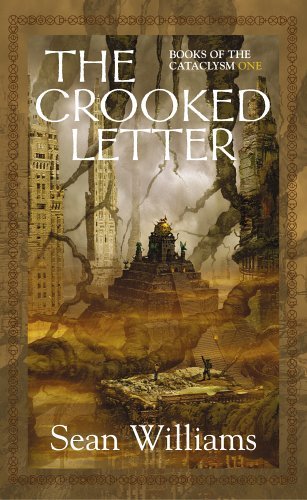 Synopsis of The Crooked Letter

When mirror twins Seth and Hadrian Castillo travel to Europe on holidays, they don't expect the end of the world to follow them. Seth's murder, however, puts exactly that into motion. From opposite sides of death, the Castillo twins grapple with a reality neither of them suspected, although it has been encoded in myths and legends for millennia. The Earth we know is just one of many "realms", three of which are inhabited by humans during various stages of their lives. And their afterlives...

In the tradition of Philip Pullman and Ursula K. Le Guin and inspired by numerous arcane sources, the Books of the Cataclysm begin in the present world but soon propel the reader to a landscape that is simultaneously familiar and fantastic.

Reviews of The Crooked Letter

This is a convoluted story with lots depth and flavor. -- Gayle Surrette, SFRevu

Readers outside Australia can now find out what all of the fuss is about. -- Cheryl Morgan, Emeral City

Williams... ability to weave a believable tapestry between the world and history that we know shines as he takes various elements from religious beliefs around the world and mixes them with fantasy elements to create the three realms that are seen in The Crooked Letter. -- Matthew Long, TheForce.Net