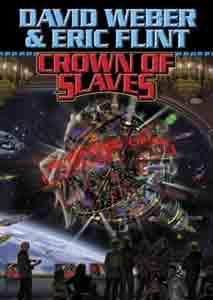 Synopsis of Crown Of Slaves

The Star Kingdom's ally Erewhon is growing restive as the regime ignores its needs. In desperation the queen sends a mission to Erewhon led by Captain Zilwicki and a princess. Their mission is undermined by a radical freed slave organization, led by a notorious killer, Jeremy X.

Reviews of Crown Of Slaves

Unfortunately, CROWN OF SLAVES did take a while to get going with an incredibly talky first two hundred pages. While a lot of material was presented in this introduction, the novel would have been strengthened by judicious pruning. -- BooksForABuck

In all, this is a very entertaining Book, both for Honor fans, and for new readers. -- David Brukman, In Other Worlds