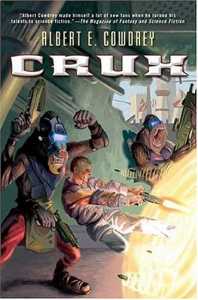 Centuries ago, the Time of Troubles left Earth shattered and nearly empty. But a few survivors in Central Asia and returnees from Luna City hung on to bring the human race back to life. Now the Government of the Universe is spread out among hundreds of worlds. Genghis Khan is idolized as the Great Unifier of Humanity, and democracy is a long-forgotten notion. Old racial and religious divisions have been swept away by the rising oceans which lap around the Appalachian Islands, and peace abounds throughout the stars.

Into this glorious golden age comes a new threat. Scientists in the World City of Ulanor have created a wormhole generator-a machine which can send people into the past. A band of Old Believers, bleeding hearts, and other malcontents who call themselves "the Crux" have captured the generator to undertake the greatest humanitarian mission of all time: to stop the Time of Troubles by assassinating the man responsible, the legendary Minister Destruction.

Of course, Crux has to be stopped. Even the smallest change to the past will destroy the future-and the Controller of Earth won't stand for that.

The agents of the Office for the Exploration of the Past-Pastplor-work to thwart Crux and other sociopaths, criminals, and do-gooders who would jeopardize the fragile peace so hard won. Their missions spanning a wide array of vividly imagined futures, Pastplor's agents protect the past from those who would dare to meddle. The time-travelers are hailed as saviors of humanity-but cannot escape the feeling that they're on the wrong side of the war.

Although Crux has many defects as a novel, it can be recommended to SF readers looking for something familiar yet startlingly different. -- D. Douglas Fratz, Scifi.com

The four interconnecting stories that make up Cowdrey's Crux are filled with enough time paradoxes to keep readers fascinated until the very end. -- Paul Goat Allen, Barnes and Noble