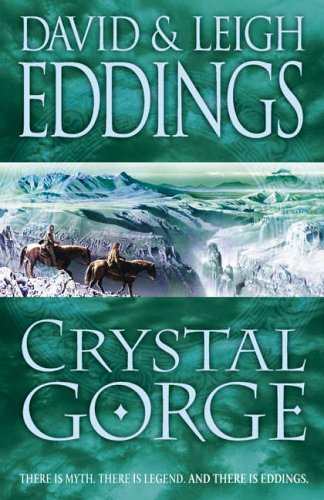 In the new epic fantasy from the masters of modern fantasy David and Leigh Eddings, the Ruler of the Wasteland challenges the Gods and wreaks devastation on their people. The Dreamers are children teetering on the brink of divinity. They have the power to change the world with their dreams. And then they have to tell the Elder Gods what they have dreamed, or chaos will reign in the Land of the Gods, and great danger will be upon them. The Elder Gods have defeated the Vlagh twice - with the aid of the Dreamers and the mysterious Treasured One who seems, worryingly, to be controlling them - but the unspeakable Creature of the Wasteland is on the fast track to world domination as the time approaches for the Younger Gods to take their place. Now all the varied resources of the domains of the Gods are marshalled to bring a halt to the spread of evil. But there is pestilence and skirmishing, and suddenly the balance of power shifts. The Ruler of the Wasteland has infiltrated another domain of the Gods, the land of short summers, where bison and deer roam. There the strange and marvellous crystal gorge, which can be no natural formation of rock, is destined to become a battleground of great beauty and great terror. The enemy is closer to knowing the secrets of the Treasured One and the Dreamers are in grave danger of delivering a nightmare to the world of the Elder Gods. A magical, on-the-grandest-scale, action-packed, totally engaging and characterful fantasy novel from the bestselling Authors David and Leigh Eddings.

As with all of David and Leigh Eddings' Books, in my opinion, this was very well crafted. -- Mark, SFFWorld

All fantasy lovers will be delighted with this new Book. -- Jo Rogers, MyShelf.com