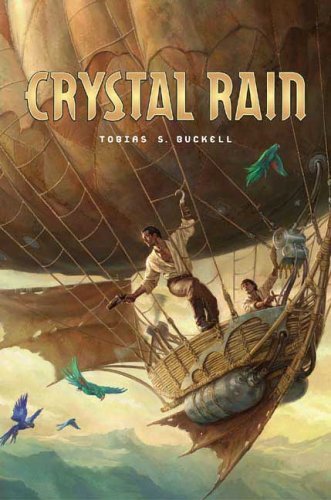 Long ago, so the stories say, the old-fathers came to Nanagada through a worm's hole in the sky. Looking for a new world to call their own, they brought with them a rich m...lange of cultures, religions, and dialects from a far-off planet called Earth. Mighty were the old-fathers, with the power to shape the world to their liking---but that was many generations ago, and what was once known has long been lost. Steamboats and gas-filled blimps now traverse the planet, where people once looked up to see great silver cities in the sky.

Like his world, John deBrun has forgotten more than he remembers. Twenty-seven years ago, he washed up onto the shore of Nanagada with no memory of his past. Although he has made a new life for himself among the peaceful islanders, his soul remains haunted by unanswered questions about his own identity.

These mysteries take on new urgency when the fearsome Azteca storm over the Wicked High Mountains in search of fresh blood and hearts to feed their cruel, inhuman gods. Nanagada's only hope lies in a mythical artifact, the Ma Wi Jung, said to be hidden somewhere in the frozen north. And only John deBrun knows the device's secrets, even if he can't remember why or how!

Crystal Rain is the much-anticipated debut novel by one of science fiction's newest and most promising talents.

For a thrilling adventure set on a unique world, this Book couldn't be bettered. -- Paul Di Filippo, Scifi.com

This story (clearly only the first in a Series) has it all - seaborne, sky, and space conflicts, diverse cultures, old secrets, mysterious protagonists (human and alien), and a desperate race to save humanity. I can't wait for more! -- Hilary Williamson, BookLoons

In this stellar debut novel, Bucknell has created an amazing world that combines Caribbean and Aztec culture and religion with long-lost technology and mysterious aliens. -- Natalie A. Luhrs, The Romantic Times Book Club

It has a sensawunda factor that will probably cancel out its spate of first-novel flubs in the minds of most fans -- T. M. Wagner, SFReviews.Net

Buckell does a nice job of setting the stage and the pages turn quickly, but the predictability of these kinds of novels is hard to miss when it takes so long to get to the obvious turning points in the plot. -- Clay Kallam, Contra Costa Times

There is, of course, a fair amount of revelation left for subsequent volumes, but Crystal Rain is complete enough in itself to provide a very satisfying first novel with a different and refreshing setting. -- Cheryl Morgan, Emeral City