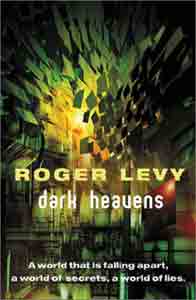 DARK HEAVENS takes us back to Roger Levy's stunning vision of a world counting out its final years as it literally falls apart. London is awash with volcanic ash, the population fatalistically playing out their lives in VR. And now, as well as VR tere is another form of escape. The new religions are offering heaven. To get there you have to die first and mass suicides have become common ... and legal. RECKLESS SLEEP was a supremely assured and visionary SF debut. DARK HEAVENS builds on that promise with flair and verve. Roger Levy has made a name for himself in record time. This is a remarkable sequence of novels in the making.

This Book comes highly recommended, providing you've had the chance to read Reckless Sleep already, to anyone and everyone who likes their sf to be well-crafted, dark, edgy, and intense. -- Ariel, The Alien Online

I>Dark Heavens is not a bad Book, it's just a Book the reader has to work at, and not in a good way. -- John Toon, Infinity Plus

This is one of the best Books I've read in a long time and is well worth a purchase. -- Tomas L. Martin, SF Crowsnest