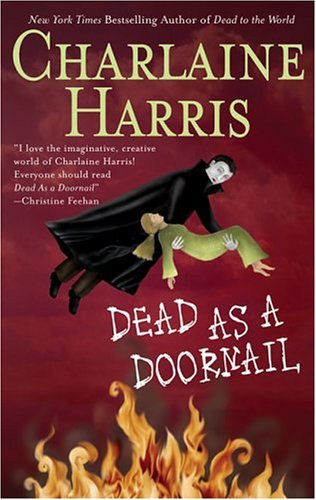 Dead as a Doornail

Synopsis of Dead as a Doornail

When Sookie's brother Jason's eyes start to change, she knows he's about to turn into a were-panther for the first time. But her concern becomes cold fear when a sniper sets his deadly sights on the local changeling population-and Jason's new panther brethren suspect he may be the shooter. Now, Sookie has until the next full moon to find out who's behind the attacks, unless the killer decides to find her first.

Reviews of Dead as a Doornail

Harris manages to keep the Series fresh by allowing her characters to grow and change based on their experiences and for the plots to grow out of their previous adventures. -- Gayle Surrette, SFRevu

For new readers to the Series, I recommend at least reading the first Book before picking up this nicely presented hardcover ... and if you...re already a diehard Harris fan, you...re going love Sookie's latest supernatural Southern adventure! -- About.com

Charlaine Harris has created a charming, beguiling and sometimes unsafe alternate Earth where the creatures of the night are both sexy and dangerous, sometimes at the same time. -- Harriet Klausner, Harriet Klausner's Review Archive

It's light, but all in all a bit disappointing, leaving me with no particular desire to hunt up the two Books I have missed, and only a mild curiosity about what comes next. -- Leila, Romantic Science Fiction and Fantasy