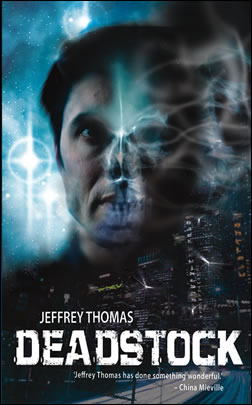 Punktown: established by Earth colonists on a faraway world, a crime-ridden megalopolis peopled by countless races. There is Stake, the private detective with chameleon-like abilities he can not control. There is his wealthy client, Fukuda, whose company mass produces life forms for labor and as playthings. There is Fukuda's beautiful teenage daughter, whose priceless one-of-a-kind living doll has been stolen. And there is the doll itself, growing in size and resentment. Meanwhile, at an abandoned apartment complex with a dark history, a tough street gang and a band of mutant squatters have been trapped inside by bioengineered life forms mindlessly bent on destroying them like an infestation of vermin. The destinies of all these individuals will converge and collide.

...a mutant mash-up of H.P. Lovecraft, Bruce Sterling and Blade Runner, a slow-motion apocalypse of gritty surrealism and future schlock limned by a stark noir vision of damaged souls scrabbling for whatever shreds of honor and dignity remain to them ... and those are the good guys. -- Paul Witcover, Scifi.com

Deadstock is a gripping page-turner written with verve and intelligence. -- Eric Brown, The Guardian