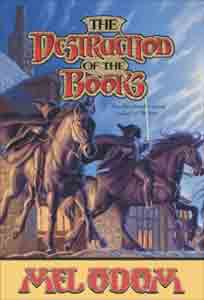 Synopsis of The Destruction of the Books

Mel Odom's award winning quest fantasy The Rover was hailed as a successor to the legacy of Tolkien and Terry Brooks. The tale of "Wick" the lowly librarian who rises to the occasion and becomes a great adventurer struck a chord with adventure lovers and fantasy fans alike.

After his adventures on the mainland Wick returned to his duties at the Vault of All Known Knowledge and quickly worked his way up the hierarchy , continuing his quest for the preservation of Books and the knowledge contained therein.

And now that quest is threatened.

It is many years later and lowly Wick is now Grandmagister Lamplighter of the Great Library. His trips to the mainland are fewer due to his advanced age, and lately he has enlisted an assistant by the name of Jugh to undertake those roving duties he used to relish.

An encounter with a goblin ship on the high seas leads to Jugh's discovery of a Book in goblin hands, a most matter that must be investigated.

This single event leads to startling revelations that forewarns of a great evil that exists that is every bit as powerful as the Vault of All Known Knowledge, and whose presence in the Great Library may indeed result in

Reviews of The Destruction of the Books

If you enjoy the tales of little people overcoming big odds, then you...ll enjoy this Book. -- Bill Lawhorn, SFRevu