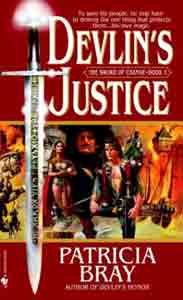 Synopsis of Devlin's Justice (The Sword of Change, Book 3)

Devlin of Duncaer has done the impossible. Desperate for death in the wake of his family's slaughter, he agreed to become the Chosen One of the neighboring Kingdom of Jorsk--the kingdom which conquered and enslaved his own native land of Duncaer. The job involved magically binding himself to Jorsk and its needs by a powerfu Geas spell, and used to come with about a three months survival time--until Devlin. Miraculously surviving attack after attack, he comes to learn once again the value of life, honor and friendship.

But just when he is reconciled to his new life, he finds he must go off seeking the Chosen One's sword of legend--which he knows for a fact was lost in conquered Duncaer. So now Devlin--once exiled from his homeland and hoping never to go back--must again face the land of his birth and the people who once trusted him. Only now he comes to them wearing the garb of their conquerors.

But when Devlin returns from that mission, it is only to discover that things in Jorsk have been getting worse in his absence. The unknown enemy's magical attacks on the kingdom are getting worse, and the king's policy of non-involvement is throwing his kingdom into chaos. As more and more borders are threatened, the nobles can do nothing but squabble and debate. It seems that Devlin is the only one who can stem the tide. But can he discover the enemy's true identity and put a stop to his or her predations before the entire kindgom collapses, taking its Chosen One down with it??

Reviews of Devlin's Justice (The Sword of Change, Book 3)

This Book is fast, and readable. -- Madeline Yeh, SFRevu

There is a lot of action in this novel but Patricia Bray fully develops her prime characters, even many secondary players, so readers get a well rounded and satisfying novel. -- Harriet Klausner, AllScifi.com