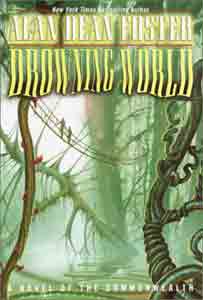 They call it the Drowning World. It is Fluva, a planet on the fringes of the Commonwealth where it rains torrentially, ceaselessly, and maddeningly for all but one month of the Fluvan year. Chief Administrator Lauren Matthias is fairly new to the position. Her primary goal: keeping Fluva's indigenous species, the warlike Sakuntala and immigrant species, the timid but hard-working Deyzara, from annihilating one another.

The wettest place on Fluva is Viisiiviisii, an immense, mostly unexplored jungle. Thanks to the endless rains and humid conditions, exotic animals and plants have thrived there, many of them deadly predators. Yet the same evolutionary process responsible for creating toxic creatures has made the jungle a treasure trove of undiscovered botanicals potentially useful in engineering everything from pharmaceuticals to perfumes. A man can get rich there. Or die trying.

Bio-prospector Shadrach Hasselemoga has come to the jungle to get rich-if he survives the terrain once his sabotaged ship goes down. When a Sakuntala and a Deyzara are dispatched by Matthias to rescue the unfortunate soul, their ship crashes, too. Now, in order to survive, the three unlikely allies must do something that no one has ever done before: walk out of the Viisiiviisii.

Meanwhile, in what passes for civilization, long-simmering tensions between Sakuntala and Deyzara erupt into violence, threatening Matthias's official position of neutrality-and her life. Behind the violence, Matthias detects a mysterious presence, one related to Shadrach's disappearance. But how are the two related? The answer, when it comes, will send shock waves through the entire Commonwealth . . . and beyond.

The exciting story line will delight fans of the Series that will enjoy the latest strife between empires through surrogates. -- Harriet Klausner, Under the Covers

The Book is worth a read, but isn't perfect. -- Chris Wyatt, Cinescape

DROWNING WORLD starts out strongly, delivers an interesting world with emotionally compelling parallels to our own recent history, but finally shortchanges the resolution. -- BooksForABuck