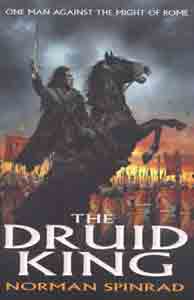 Synopsis of The Druid King

By 60 BC the Romans had conquered much of the known world, for few dared to oppose the relentless expansion of the Republic, and those who did . failed. And now Julius Caesar has turned his attention to the invasion of Gaul. Victory there will give him the power he craves - but one man stands against him: Vercingetorix. Vercingetorix knows that the people of Gaul must fight, or else face the destruction of their culture and enslavement to another. Yet few at first believe that Vercingetorix can unite the divided tribes of Gaul, fewer still that he can lead them on to victory. But as the legions battle for survival Caesar soon realises that this time Rome may be fighting a war it cannot win .

Reviews of The Druid King

The Druid King is an uncompromising political tragedy which forces readers to weigh the human cost of war. -- Gavin J. Grant, Bookpage

Whatever it is, The Druid King is fantastic. -- John C. Snider, Scifi Dimensions

This is a marvellous historical novel for anyone fascinated by ancient European, Celtic and/or Roman history. -- Michael Lohr, The Zone