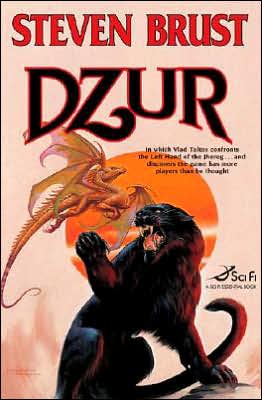 Vlad Taltos, short-statured, short-lived human in an Empire of tall, long-lived Dragaerans, has always had to keep his wits about him. Long ago, he made a place for himself as a captain of the Jhereg, the noble house that runs the rackets in the great imperial city of Adrilankha. But love, revolution, betrayal, and revenge ensued, and for years now Vlad has been a man on the run, struggling to stay a step ahead of the Jhereg who would kill him without hesitation. Now Vlads back in Adrilankha. The rackets he used to run are now under the control of the mysterious Left Hand of the Jhereg a secretive cabal of women who report to no man. His ex-wife needs his help. His old enemies arent sure whether they want to kill him, or talk to him and then kill him. A goddess may be playing tricks with his memory. And the Great Weapon hes carrying seems to have plans of its own. Picking up directly where Issola left off, Dzur is Vlad Taltos at his bestcrackling, swashbuckling adventure fantasy with edge.

It's a novel composed of all the kernels of what he loves best about this kind of fantasy fiction. But there's no connective tissue, no cake beneath the frosting. -- Paul Di Filippo, Scifi.com

Still sort of a biographical fiction, DZUR is a fine entry that Steven Brust's fans will fully appreciate for its light into what made Taltos what he is. -- Harriet Klausner's Review Archive