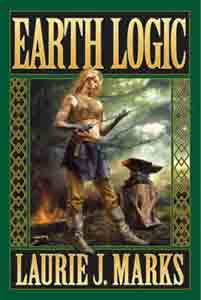 A sweeping drama of war, intrigue, magic, and love

With Earth Logic, Laurie J. Marks continues the epic of her stunningly imagined world of Shaftal, which she first introduced in Fire Logic.

Shaftal has a ruler again, a woman with enough power to heal the war-torn land and expel the invading Sainnites from Shaftal. Or it would have a ruler if the earth witch Karis G'deon consented to rule. Instead, she lives in obscurity with the fractious family of elemental talents who gathered around her in Fire Logic. She is waiting for some sign, but no one, least of all Karis herself, knows what it is.

Then the Sainnite garrison at Watford is attacked by a troop of zealots claiming to speak for the Lost G'deon, and a mysterious and deadly plague attacks the land, killing both Sainnites and Shaftali. Karis must act or watch her beloved country fall into famine and chaos. And when Karis acts, the very stones of the earth sit up and take notice.

Filled with political intrigue, magic, and the power of both familial and romantic live, this sequel to Fire Logic proves that Marks is a true talent. -- Cindy Lynn Speer, Fantastica Daily

I found the Book eminently absorbing and satisfying, like a good, solid meal. -- Victoria McManus, SFRevu

J. Mark's fantasy novel is exciting because of the clash between two different cultures and this differentiation makes this Book a fascinating look at a world in flux. -- Harriet Klausner, BooksNBytes

Marks has a beautiful, flowing writing style that belies the earthy violence of her tale, and she uses it to create an intelligent fantasy with subtle messages behind the battles and derring-do.. -- Jen Talley Exum, Romantic Times Book Club