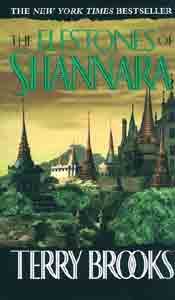 The Elf Stones of Shannara

Synopsis of The Elf Stones of Shannara

Once again, Terry Brooks brings us an epic novel of wonder and adventure in this eagerly awaited sequel to his best-selling novel The Sword of Shannara.

Ancient, ultimate evil threatened the Elves and the Races of Man. For the Ellcrys, the tree created by long-lost Elven magic, was dying, loosing the spell of Forbidding that locked the hordes of ravening Demons away from Earth. Already the Reaper, most fearsome of Demons, was free. Only one source of protection was powerful enough to stop it: the Elfstones of Shannara.

The Stones and the right to use them belonged to Wil Ohmsford, given him by his grandfather Shea. And now Allanon, legendary Druid guardian of the Races, summoned him from his studies in Storlock to protect Amberle, the Elven girl who must carry a seed of the tree to the mysterious Bloodfire, life-source of earth, there to be quickened and to create a new Ellcrys.

While Allanon and the Elves fight a hopeless war against the emerging multitudes of Demons, Wil and Amberle plunge forward in a seemingly impossible quest for the Bloodfire. Before them lie unknown dangers, impassable barriers, and the savage Wilderun, from which none have ever escaped.

Behind them follows the Reaper. Against it, Wil has the Elfstones -- but he has lost all power to control them. Weaponless, he and Amberle watch as the shadow of the Reaper appears on the trail before them...

Here are valiant companions -- old and new -- awesome foes, wonders, romance... and the ancient mystery of how the Elves survived among the Races of Man. -- terrybrooks.net

Reviews of The Elf Stones of Shannara

This is Terry Brooks at his finest! -- Chris Hart, FantasyReviews.com

I believe this is one of the best examples of a sequel surpassing the original Book. -- Alan, FutureFiction.com

THE ELFSTONES OF SHANNARA is a good read, slightly better than its predecessor though still not what is to come later. -- Toby's Land of Fantasy Book Reviews

This, in my opinion is the best novel in the first Shannara Series -- Groz & Choccy's Virtual Home

It is not the greatest fantasy fiction I have read, far from it, but nevertheless this Book is much better than the first, and it is a clear improvement... -- Thomas Ros...n, Fantasy Webgroup

One of the best in the Series, not to be missed. -- Heart o' Glory