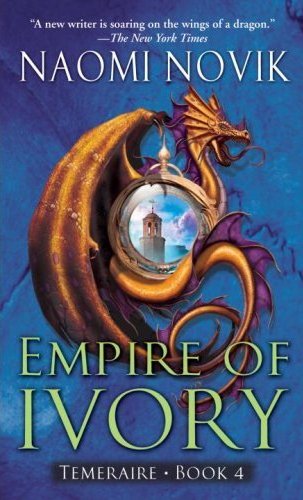 Synopsis of Empire of Ivory

Tragedy has struck His Majesty's Aerial Corps, whose magnificent fleet of fighting dragons and their human captains valiantly defend England's shores against the encroaching armies of Napoleon Bonaparte. An epidemic of unknown origin and no known cure is decimating the noble dragons... ranks...forcing the hopelessly stricken into quarantine. Now only Temeraire and a pack of newly recruited dragons remain uninfected...and stand as the only means of an airborne defense against France's ever bolder sorties.Bonaparte's dragons are already harrowing Britain's ships at sea. Only one recourse remains: Temeraire and his captain, Will Laurence, must take wing to Africa, whose shores may hold the cure to the mysterious and deadly contagion. On this mission there is no time to waste, and no telling what lies in store beyond the horizon or for those left behind to wait, hope, and hold the line.

Reviews of Empire of Ivory

Empire of Ivory builds on the strengths of the previous Books: the skillfully wrought 19th-century-style prose; the well-researched, smartly altered history; the exciting, intelligent action scenes; the fascinating, nuanced relationships between the well-drawn human and dragon characters; and the insightful, thought-provoking treatment of bigotry and equality. -- Cynthia Ward, Scifi.com

In fewer than 400 pages, Empire of Ivory displays more narrative range and depth of character, more surprises (including the mother of all "holy shit!" endings that pummels anything Rowling ... no disrespect to her in the least ... ever dreamed of), and more pure white-knuckle action-adventure excitement than most fantasy novels achieve in over twice the length. -- Thomas M. Wagner, SFReviews.net

Unfortunately, it feels like Novik lacked the editing she enjoyed on the other Books and that detracted from the overall effort. -- Jennifer, SFSignal

I can hardly wait for the next. -- Sherwood Smith, SFSite

...a very good addition to the Series as it stands. -- Graeme's Fantasy Book Review

...a great read, a great continuation to the story... and a lot happened. -- Twisted Kingdom