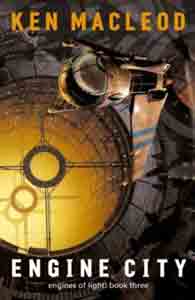 The acclaimed Engines of Light Series that began with Cosmonaut Keep and Dark Light reaches its staggering conclusion in Engine City. Two hundred years ago, a starship arrived at Nova Babylonia and unloaded a cargo of encyclopaedic information from the solar system of the mid-21st century. One hundred years ago, Nova Babylonia had used that information to create a Modern Regime - a heavily industrialised civilisation ready to defend itself against the aliens whose arrival was believed to be imminent. Today, Nova Babylonia is in decline. The alien invaders never came and the Regime has fallen. Into this corrupt city arrives an outsider whose purpose is ambiguous. But businessman or spy, he is not the only visitor. War is coming to Nova Babylonia. And the gods.

This isn't a piece of great SF, but it is still well worth reading. -- Mark L. Olson, The New England Science Fiction Association, Inc.

Absorbing and fascinating, I couldn't stop reading this. -- Joe Gordon, The Alien Online

I think that I enjoyed this Book so much because it is like real life (insomuch as a Science Fiction novel populated by alien spider-monkeys and ancient ancestors annoying their descendants can be). -- Katie McGivern, SF Crowsnest

After reading the final sections three times, I'm not sure exactly what happened and why. -- D. Douglas Fratz, Scifi.com