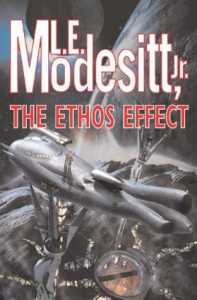 Synopsis of The Ethos Effect

Set in the same universe as The Parafaith War (but two centuries later, and intended to be read independently), The Ethos Factor is the story of Commander Van C. Albert of the Republic Space Force of Taran, a brave and resourceful officer who once defeated a larger enemy ship but indirectly caused the loss of a civilian liner in the process. Cleared by the board of inquiry, but an embarrassment to the high command, he retains his commission but is given only dead-end assignments. For a time, he must watch helplessly as cold war among economic, religious and political rivals evolves toward interstellar open warfare.

Assigned as a military attach... at the Taran embassy on Scandya, Van is seriously wounded foiling an assassination. Decorated, promoted and summarily retired while still in a coma, he wakes to find himself honorably but intolerably unemployed. Then the harmless sounding Integrated Information Systems foundation of the Eco-Tech Coalition recruits him to fly a starship, Van finds he now has a powerful new vantage point not just for observation, but for action. The IIS has interests everywhere and Van is not just a pilot, but their point man in a conflict that will shake the worlds.

Modesitt uses a distinctive blend of space battles, political and economic intrigue, and issues of race and religion to address deep questions of good and evil, ethics and self-interest. Van Albert makes his decisions; it is for you to decide if he is a hero.

Reviews of The Ethos Effect

Weak characterization undermines what could have been a powerful exploration of moral dilemmas... -- Clinton Lawrence, Scifi.com

Overall, the fast pacing of the Book, and a likable hero keep the reader's interest. -- David Brukman, In Other Worlds